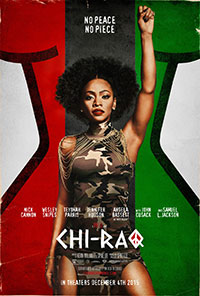 Chi-Raq is a modern day adaptation of the ancient Greek play “Lysistrata” by Aristophanes. After the murder of a child by a stray bullet, a group of women led by Lysistrata organize against the on-going violence in Chicago’s Southside creating a movement that challenges the nature of race, sex and violence in America and around the world.... Full synopsis »

Chi-Raq is a movie with a message--it’s the delivery that’s the problem. Spike Lee has outdone himself once again with the racially charged satire, which for some reason is based on the Classical Greek comedy Lysistrata. Horribly written, awfully made, sexist, intolerable, insufferable and just fucking awful, Chi-Raq is arguably the worst movie of the year, if not the decade. Full movie review »
F
FilmJabber
NA
Users
YOUR RATING
A
B
C
D
F
Movie Overview Movie Synopsis Movie Review Movie Trailers

On DVD: 'Violent Night' is a Christmas Present to Us All

'Missing' is Nearly as Good as 'Searching'

'The Old Way': A Gun That Fires Blanks