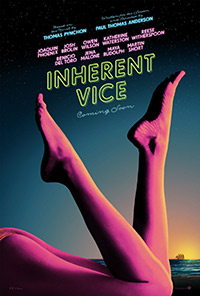 "Inherent Vice" is the seventh feature from Paul Thomas Anderson and the first ever film adaption of a Thomas Pynchon novel.

When private eye Doc Sportello's ex-old lady suddenly out of nowhere shows up with a story about her current billionaire land developer boyfriend whom she just happens to be in love with, and a plot by his wife and her boyfriend to kidnap that billionaire and throw him in a loony bin... well, easy for... Full synopsis »

I may be a dumbass, but I was lost most of the time while watching Inherent Vice. That doesn't mean I didn't like it. But seriously, I had to read the plot synopsis on Wikipedia multiple times during Paul Thomas Anderson's two-and-a-half hour Big Lebowski wannabe just to follow along. Full movie review »
B-
FilmJabber
NA
Users
YOUR RATING
A
B
C
D
F
Movie Overview Movie Synopsis Movie Review Movie Trailers

Ignore the Critics. 'Don't Worry Darling' is Worth It

'Blonde' Goes for Broke, for Good or Bad

'Barbarian' is a Bloody Blast