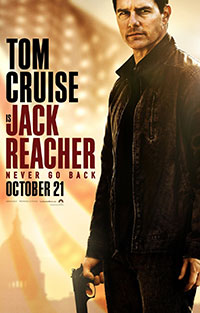 Paramount Pictures and Skydance Productions are moving ahead with a sequel based on Lee Child's most recent Jack Reacher novel, "Never Go Back." In the novel, Reacher goes back to his old Virginia military base to have dinner with a female colleague who he learns has been arrested, and soon, Reacher himself finds himself being charged with crimes himself. Once again, he needs to learn the truth the way that only Jack Reacher knows how,... Full synopsis »

I had to take a piss (okay, I had to go #2), but I was afraid to leave for fear of missing a plot turn. That’s how quickly Jack Reacher: Never Goes Back unfolds—but is that enough to make this sequel worth it? Full movie review »
C+
FilmJabber
NA
Users
YOUR RATING
A
B
C
D
F
Movie Overview Movie Synopsis Movie Review Movie Trailers

'The Hunt' Emerges From Death with New Trailer