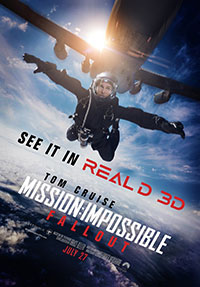 During the epic, 40-minute conclusion to Mission: Impossible – Fallout, Tom Cruise hurtles precariously over the edge of cliff, which caused my mom, sitting next to me, to clamp down hard on me knee—and the knee of the person sitting on the other side of her. No idea who that person was, but if you’re reading this, my apologies. Full movie review »
A
FilmJabber
NA
Users
YOUR RATING
A
B
C
D
F
Movie Overview Movie Synopsis Movie Review Movie Trailers

'Violent Night' is a Christmas Present to Us All

'Women Talking' Not Worth Talking About

Is the 'Guardians of the Galaxy Holiday Special' Good?