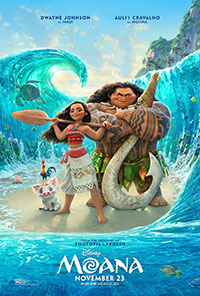 Three thousand years ago, the greatest sailors in the world voyaged across the vast South Pacific, discovering the many islands of Oceania. But then, for a millennium, their voyages stopped – and no one today knows why. From Walt Disney Animation Studios comes “Moana,” a sweeping, CG-animated adventure about a spirited teenager who sails out on a daring mission to prove herself a master wayfinder and fulfill her ancestors’ unfinished quest. During her journey, Moana... Full synopsis »

The Disney machine is back in motion once again with Moana, a movie that is pleasing enough given that it feels like something churned out by the Disney machine. Beautifully if unambitiously animated and featuring a strong, independent and non-white princess that makes for a great role model for young girls, Moana has everything it needs to be a Disney hit, but not enough to be a Disney classic. Full movie review »
B-
FilmJabber
NA
Users
YOUR RATING
A
B
C
D
F
Movie Overview Movie Synopsis Movie Review Movie Trailers

'Thirteen Lives' is On Amazon. It's More Than Worth Watching.

'Prey' is the Best 'Predator' Movie Since 'Predator'

'Nope' Not Quite a Yep