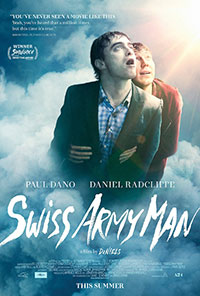 A wholly original, enormously entertaining, and deeply heartfelt look at what it means to be human, Swiss Army Man is the feature film debut of acclaimed music video directors Daniel Scheinert and Daniel Kwan (collectively known as DANIELS, and responsible for the beloved “Turn Down For What” video, among many others). Bursting with limitless creativity in both form and content, "Swiss Army Man" goes from the absurd to the emotional to the whimsical to the... Full synopsis »

A young, depressed man stranded on a deserted island befriends a farting corpse and uses his special powers to get him back to civilization in Swiss Army Man, and if that sounds like an awful plot for a movie, this Paul Dano/Daniel Radcliffe buddy drama-comedy probably isn’t for you. If it sounds even remotely intriguing, however, then dive in, because Swiss Army Man is original, funny, entertaining and a flatulently good time. Full movie review »
A-
FilmJabber
NA
Users
YOUR RATING
A
B
C
D
F
Movie Overview Movie Synopsis Movie Review Movie Trailers

'The Hunt' Emerges From Death with New Trailer