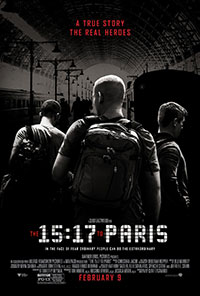 In the early evening of August 21, 2015, the world watched in stunned silence as the media reported a thwarted terrorist attack on Thalys train #9364 bound for Paris—an attempt prevented by three courageous young Americans traveling through Europe. The 15:17 to Paris follows the course of the friends’ lives, from the struggles of childhood through finding their footing in life, to the series of unlikely events leading up to the attack. Throughout the harrowing... Full synopsis »

It’s rare that you see a movie as poorly made as The 15:17 to Paris, especially one made by an Oscar-winning icon, but within three minutes it’s clear that anyone who bought a ticket to ride this train made a horrible, horrible decision. Full movie review »
F
FilmJabber
NA
Users
YOUR RATING
A
B
C
D
F
Movie Overview Movie Synopsis Movie Review Movie Trailers

The Badass Viking Epic 'The Northman' is Now on VOD

Watch the First 'Avatar: The Way of Water' Teaser