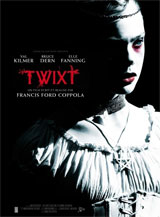 A writer with a declining career arrives in a small town as part of his book tour and gets caught up in a murder mystery involving a young girl. That night in a dream, he is approached by a mysterious young ghost named V. He's unsure of her connection to the murder in the town, but is grateful for the story being handed to him. Ultimately he is led to the truth of the story,... Full synopsis »

I think I've lost faith in Francis Ford Coppola. Over the last several years the Godfather director has abandoned traditional Hollywood fare in favor of lower budgeted and more personal fare, an admirable decision...if not for the declining quality of each project. Twixt is Coppola's latest effort and it is, without a doubt, a mess. Full movie review »
F
FilmJabber
NA
Users
YOUR RATING
A
B
C
D
F
Movie Overview Movie Synopsis Movie Review
Movie Trailers

The Best Movies on Netflix this August

Liam Neeson Debuts as the 'Honest Thief' in First Trailer