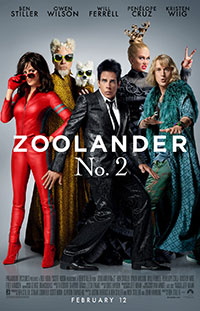 Zoolander 2 is set 10 years after the original movie, and Derek and Hansel are literally forgotten, forcing the male models to reinvest themselves to become relevant once again.... Full synopsis »

There is a lot of hate in the world in these days. A lot of tension. A lot of unrest and even more disagreement. Whether it be Trumpian bombs or Putin-esque propagonda, World War III has never felt closer. And then along comes Zoolander 2, the sort-of long-awaited comedy that appears to be evoking all levels of anger and hate from critics, as if this 13-years-too-late sequel actually had a chance of matching the Ben Stiller-in-his-prime original. Full movie review »
C+
FilmJabber
NA
Users
YOUR RATING
A
B
C
D
F
Movie Overview Movie Synopsis Movie Review Movie Trailers

That's Jessica Chastain in 'The Eyes of Tammy Faye'?

'F9' is Insultingly Stupid and We Deserve Better