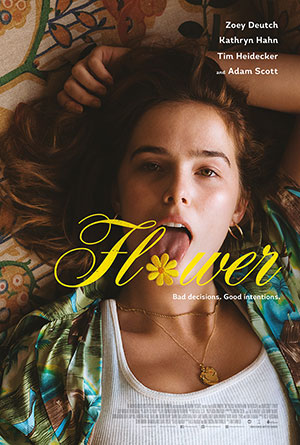 When your movie begins with a teenage girl giving a blow job to a police officer, you better follow through with some edgy shit. Instead, Flower softens as it progresses, resulting in a well-intentioned but ultimately forgettable teen drama-comedy.

Zoey Deutch delivers a strong performance as Erica Vandross, a girl who has no qualms about doing what she needs to do—even if it involves giving head to police officers (to subsequently blackmail them). Deutch, who at the age of 24 is starting to enter that “hard to still pass as a high school student” phase, injects constant energy and life into the story and really carries the film.

Deutch aside, Flower isn’t quite as dynamic or clever as it first appears. While director and co-writer Max Winkler lays the foundations of a less-than-standard teen film—the introduction of an awkward and suicidal step brother (Joey Morgan) and Erica’s plot to seduce and incriminate an alleged pedophile (Adam Scott) are two elements you don’t typically see—Flower really never delivers in a satisfying way.

Though the movie, also written by Alex McAulay and Matt Spicer, has bursts of brilliance and some entertaining stretches, its third act fails to match the edginess seen earlier on. Flower works best when Erica is doing bad things, but as soon as she starts doing good things, the movie loses its focus and reason for existing.

Flower is a decently made movie and features strong performances by Deutch and Morgan, but it’s hard to find much reason to recommend this film to the masses. Entertaining but not entertaining enough, edgy but not consistently so, Flower never fully blossoms.