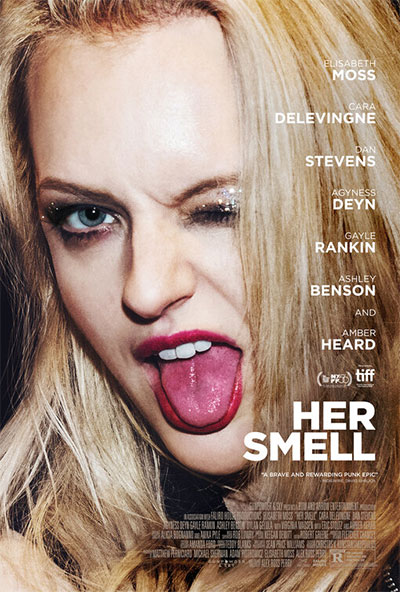 If Elisabeth Moss’s performance in Her Smell gets boiled down to the actress going batshit crazy for two hours, it’s an injustice on par with all injustices. Her Smell features what could end up being the best performance of the year, the portrayal of a descent into madness and psychosis, the out-of-control spiraling of a punk rock star defined by drugs and alcohol and pure, unadulterated chaos.

Her Smell is a one-band show, even with a supporting cast that includes Cara Delevingne, Dan Stevens, Agyness Deyn, Virginia Madsen, Eric Stoltz, and Amber Heard. Moss (“Mad Men,” “The Handmaid’s Tale”) is a tour de force if you’ve ever seen one, the Night King embodied in a tragic character, her sole mission to destroy everything that comes in contact with her.

The Alex Ross Perry character study doesn’t have a lot of plot, leaning heavily on Moss to throw tantrums and terrorize those around her. But as stated earlier, to chalk up her performance as chomping scenery is a crime. As frantic and off kilter her character is, every moment, every nervous twitch, every pained blink, is delivered with organic intentionally. Moss has opened up her soul and let the Devil in. It’s a performance for the ages.

The movie itself has a life of its own. Driven by a moody, atmospheric score by Keegan DeWitt that pulses through the film—and audience—at every turn, Her Smell is a beautiful, engrossing display of mesmerizing chaos. As much as Moss slays in front of the camera, Ross commands every nuance behind it, transforming a relatively simple story into an entrancing, intoxicating experience.

It’s a shame that the movie all but flatlines near the end, perhaps a necessary step but one that is noticeably off from the rest of the movie. Her Smell lives and dies on Moss’s energy, and when her character finally loses her energy, so does the film. Perry rebounds with a satisfying climax, but by then it’s too late (and perhaps impossible) to recapture the pure magic he had put on display.

Her Smell is unable to sustain itself for the entire 2:15 running time, but when it’s hot, it’s really hot. Elisabeth Moss is absolutely incredible, Alex Ross Perry is at the top of his game, and Her Smell is the best movie you never saw coming.

Netflix's 'Mosul' is One of the Best Modern War Films