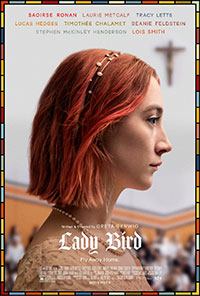 If you’re going to take flight with just one movie this year, it might as well be Lady Bird, a funny, fast-paced comedy-drama that is among the year’s best thanks to strong performances by all involved and earnest direction by first-timer Greta Gerwig.

Lady Bird stars Saoirse “How the Hell Do I Pronounce Her Name” Ronan (who, at age 23, already has two Oscar nominations to her name) as a Sacramento teenager named Christine who for some reason likes to be called Lady Bird, because obviously she doesn’t want to be bullied or anything. Lady Bird has to deal with the normal things a teenage girl with a terrible name has to deal with, like boys, bad grades, getting into college, a mother who is outright awful to her most of the time and a psychological issue that makes her want to be called Lady Bird.

The movie is considered a potential contender in the Best Picture category, but what could hold it back is that, on the surface, it is your pretty typical coming-of-age film. In other words, it doesn’t try to be more than it is, a rather small-scale drama that neither has the flash of bigger, harder hitting machinations nor addresses important social issues that Hollywood loves to embrace.

But what works about Lady Bird is that it doesn’t try to be more than it is, that rather than trying to go big Gerwig perfects every little moment of her little movie. And Lady Bird has many little moments. Gerwig rarely lingers on a scene or situation, opting through quick edits and sudden transitions to move her protagonist onto the next thing. This approach allows her to masterfully bounce between every emotion a teenager might feel - at one moment, Lady Bird may be laughing hysterically as she chomps on communion wafers with her bestie, the next crying, and then the next back to having a good time again. The best drama-comedies are able to portray life as it really is - sudden swings of ups, downs and sideways - and Lady Bird is almost always spot on.

Ronan is terrific, but so is the rest of the cast. Laurie Metcalf, as Lady Bird’s emotionally hardened mother, is fantastic, and the role and quality of performance are just the kinds of things that get you award nominations. Tracy Letts, who plays the father, is also fantastic in a less sensational way (I just wanted to hug him!), while Beanie Feldstein is great in a smaller role.

More than anything else, though, Lady Bird is funny - and in a sincere way. Gerwig has struck gold here, her movie a fun, engaging, beautifully made piece of art that is at both a serious awards contender and easy crowd pleaser.

'Kajillionaire' Worth the Time, Not the Money

Controversial 'Antebellum' is Almost Great but...