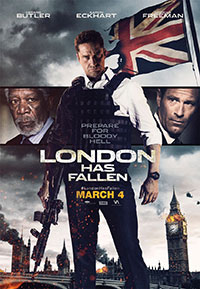 ‘Merica, f**k yeah! A movie that is sure to appeal to rule-by-gunfire Republicans and, in my case, liberals who just want to see the world burn, London Has Fallen is about a secret service agent who must protect the President of the United States of the best f**king country in the whole wide f**king world (America) after terrorists take over London, with the primary goal to capture him and execute him on live television to get revenge for a bombing years earlier.

Needless to say, the terrorists do not succeed, because Gerard Butler is on the scene to punch, stab, shoot and blow up every bad guy in his way.

(the terrorists do succeed, however, in killing five other heads of state, who apparently are unconcerned about security)

London Has Fallen is the sequel to the silly-but-entertaining Olympus Has Fallen, which sometimes is referred to that movie that did Die Hard better than the last Die Hard movie (both were released in 2013). If you liked Olympus Has Fallen, you’ll probably like this one, even if the dialogue is even more absurd.

The movie features several pretty-good action sequences, though one could argue the entire movie--once the terrorists actually attack--is one long action sequence. And while Butler struggles to say some of his lines with a straight face, he pulls off being a badass well enough, especially in a scene where he takes down a legion of baddies inside an MI6 safe house.

Sure, there are plot holes, and sure, the movie plays to stereotypes about terrorists (who are never actually referred to as Muslim, even though it’s obvious), and sure, the movie is pretty damn predictable, but London Has Fallen harkens back to action movies of another age, when it was okay for Americans to kick ass at everyone else’s expense. It’s not great cinema, but it’s entertaining cinema, and it does exactly what the filmmakers intended it to do.

London Has Fallen isn’t an action classic by any means, but it has enough death, destruction and other bloody violence to be worth the trip. If you’re British, though, you might be disappointed to see how much better America is at defeating terrorists in your country than your own special forces.

'Kajillionaire' Worth the Time, Not the Money

Controversial 'Antebellum' is Almost Great but...