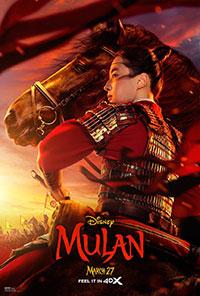 Disney’s live-action Mulan is a movie made for the pandemic, except it wasn’t made for the pandemic. Lugging a large budget and Disney-high expectations, the remake of the 1998 animated film was supposed to be one of the first theatrical blockbusters of the year… but feels more a match for captive at-home audiences desperate for relative-quality fare.

Boasting bright visuals and a decent amount of action scenes, Mulan has a pretty aesthetic that falls in line with the Disney brand. It also, sadly, bears another Disney trademark: it plays things safe, verging into generic at times (at all times?), in an attempt to deliver what could be a brutal war film as a family-friendly piece of entertainment that caters to both Western and Chinese audiences.

As pretty as the movie is, much of it also looks ripped from Disneyland; the set pieces have that “fake rock” look that is fine from afar but off-putting when you lean in close (or watch on a high-definition television). Mulan also seems to have cut corners during the editing process, whether to shave out moments that would be objectionable to younger audiences (it’s rated PG-13, but it’s a watered down PG-13) or save money on visual effects. Caro had the opportunity to deliver some pretty exciting action sequences, but the fight choreography lacks spark or excitement. In her debut scene, for example, Li Wong’s witch makes quick work of a legion of soldiers; handled correctly, this scene could have been breathtaking, but instead it comes off as neutered.

That’s not to say there isn’t spectacle. Mulan has enough scope, prestige, and action to gloss over some of its weaknesses, though it’s far from spellbinding. I found myself checking my phone quite frequently, especially early on since it takes quite a long time to get going. But once it does, Mulan rarely lets up.

Even still, it’s hard to care too much about what is happening. The characters, and the performances, hover in the mediocre range. The villain, played by Jason Scott Lee, is bland, but then again, sadly, so is Yifei Liu, who plays the title character. She certainly looks the part, and is fine as the protagonist, but rarely inspires and certainly never commands your attention. Mulan is a role that should leave you cheering, but she’s just there, going through the motions.

Mulan’s Disney+ launch isn’t exactly what the studio had in mind when it invested a staggering $200 million into the production. In hindsight, that ridiculous budget aside, the streaming service is the perfect platform for its release--and the timing, when many audiences are still staying at home either by mandate or choice and have been offered very few cinematic options in months, is spot on. That isn’t a compliment. Mulan looks and feels like a big-budget straight-to-streaming release. It’s serviceably entertaining and relatively harmless. But its unwillingness to be bold, to be fierce, to be anything but a generic Disney cash grab, makes it hard to love, let alone like. Thankful for Mulan, in a COVID-dominated world, movies like this look a little more appealing than they actually are.

Review: 'Come Play' is No 'Babadook'

Tom Hanks and Paul Greengrass Reunite for 'News of the World'