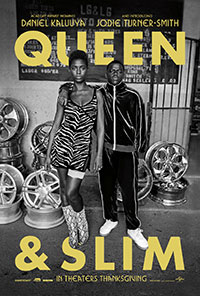 Queen & Slim reminds me a lot of 2018’s Widows: released at Thanksgiving, proficiently made, yet overlooked by audiences, almost instantly forgotten. The two films are otherwise completely different, but as I sat watching this somewhat unique crime thriller, I couldn’t help but think, “It’s a real shame more people aren’t going to experience this.”

Queen & Slim stars Daniel Kaluuya (Get Out) and lesser known Jodie Turner-Smith as two black individuals wrapping up their first and presumably last date; director Melina Matsoukas and writer Lena Waithe could make an entirely prequel just documenting their cringeworthy interaction and have a pretty good comedy/character study on their hands.

But Queen & Slim isn’t a comedy; as the two drive home together, a racist white cop pulls them over, things escalate, and they flee for their lives, the cop lying dead on the side of the street.

Not exactly the way you want a first date to end.

Matsoukas uses the incident to trigger an interesting exploration of race relations in America, all under the guise of a desperate, multi-day and multi-state escape that has the two slowly bonding over their shared circumstances and transforming into something that they never were nor intended to be: criminals.

Along the way, the unwitting couple finds champions and protectors, skeptics and betrayers, other black people who can commiserate with them, who feel inspired by them, and others who see their crime spree of sorts as a perceived confirmation of an inaccurate reality: that all black people are guilty until proven innocent.

The exploration of race here isn’t profound, but it is fascinating, at least in the way the filmmakers weave such an examination into this modern day Thelma & Louise-esque situation. The characters the two leads encounter are colorful, the events that unfold largely unpredictable, and most importantly their personal journeys, separate and together, draw you in. The racial elements are crucial to the film, and yet the storyline itself propels itself forward on the chemistry of Kaluuya and Turner-Smith.

Like Widows, Queen & Slim is a slick, entertaining production; like Widows, it also, for whatever reason, doesn’t have much staying power. As good as it is, it doesn’t hang with you for days or weeks after you’ve seen it, nor does it elicit the kind of anger you’d expect from a film such as this. It’s by no means flat, but a movie like this needed to simmer with energy, with energy, with emotion, and while it’s worth seeing, Queen & Slim isn’t the emotional suckerpunch it probably needed to be to really grab hold.

'The Little Things' Has Big Problems

The 'Godzilla vs. Kong' Trailer is Here

'Fatale' is More Fatal than Attractive