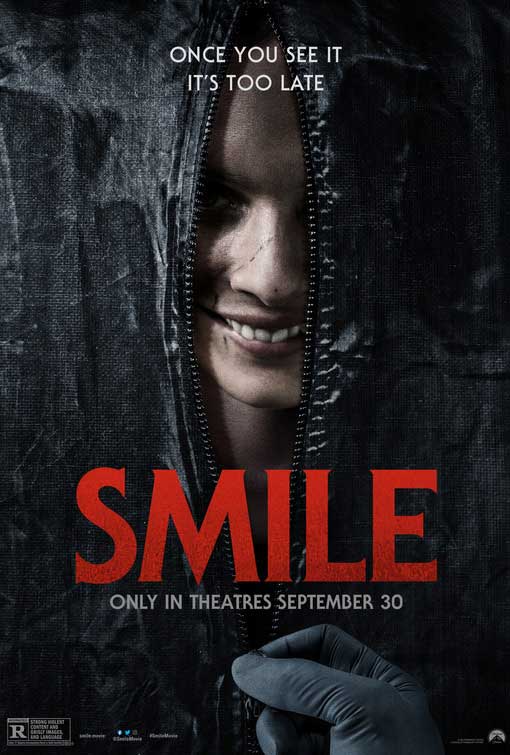 Smiles can be warm. Friendly. They can also be fucking terrifying. So it goes in Smile, the creepy and sinister horror movie from writer/director Parker Finn that will make you think twice the next time a handsome stranger flashes some teeth your way.

There’s nothing particularly original about Smile’s story–some kind of entity attaches itself to a person, forces them to kill themselves after several days of seemingly delusional suffering, and then moves onto the next victim–and most horror fans can guess how this picture will end an hour in.

But I’ll take a predictable story executed extremely well any day of the week, with Finn showing a knack for establishing an experience that is continuously and increasingly unsettling and at times downright frightening. While he relies on jump scares just a bit too much, there’s no denying they are effective.

Early on, one audience member shouted, “Oh, shit” and everyone else laughed in agreement.

Smile establishes Finn as a director to watch, his attention to detail and mastery of setting the mood on display. Supported by entrancing and creative cinematography by Charlie Sarroff and a memorable score by Cristobal Tapia de Veer (The White Lotus), Smile bats above its weight. The movie is consistently suspenseful and perhaps more importantly is reliably unsettling; Finn makes it clear early on that you should never let down your guard.

Smile also boasts a reasonable level of gore, most of it practically done. The film’s final minutes have one really batshit moment that literally brought a smile to my face, because it’s the kind of thing you just don’t see in a studio horror movie these days.

It’s not perfect, though. Two hours seems like a long time for a horror movie with a pretty basic story, and as good as star Sosie Bacon is at looking and acting absolutely nuts for the vast majority of that runtime, Finn overplays the “hysterical woman” motif. We get it, everyone thinks she’s crazy but we know she isn’t… get on with it.

Smile could have been leaner but not much meaner. A predictable story is elevated by superb execution, making this horror movie one to see, surrounded by as many people as possible. Just be careful about anyone who flashes those pearly whites at you, though.

'Women Talking' Not Worth Talking About

Is the 'Guardians of the Galaxy Holiday Special' Good?