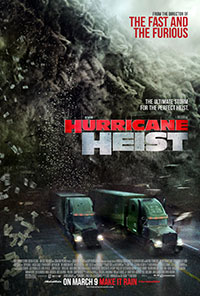 The Hurricane Heist is exactly what you’d expect and want it to be: a dumb, poorly written heist action film that is nonetheless fast-paced and entertaining from start to finish.

The “it is what it is” thriller comes from director Rob Cohen, the guy who has made a career of mildly entertaining, largely dumb movies that are rarely very good but not always completely forgettable. Though he’s known for the massively overrated The Fast and the Furious (the first one) and the loved-it-at-the-time Dragonheart, one could argue that The Hurricane Heist is the best film of his career.

Even if that isn’t saying much.

Maggie Grace (Lost) stars as a U.S. Treasury officer who attempts to prevent a massive cash robbery as a Category 5 hurricane approaches by killing a few guys and spouting one liners with the enthusiasm of an unplugged blender. She’s aided by the emotionless Toby Kebbell, who played the villain Koba in Dawn for the Planet of the Apes but who may be better known as Dr. Doom in the ill-fated Fantastic Four remake.

In short, the acting ain’t great, the dialogue is worse, and The Hurricane Heist isn’t going to win any awards.

Nonetheless, where the movie succeeds is in entertainment value. None of the action scenes are particularly noteworthy, though the film boasts more spectacle than you might expect—a shootout in a flooded town and a climax involving semi-trucks getting sucked into a vortex have more scale than you’d expect from a $45 million budget—but The Hurricane Heist is consistently fast-moving. The movie wastes little time getting to the action, and from there Cohen mixes things up enough to keep things interesting.

Considering The Hurricane Heist has a 4.9 rating on IMDB (notably lower than the 1998 Hard Rain thriller about a robbery during a massive flood) and a 45% Rotten Tomatoes rating, not everyone agrees—and I wouldn’t fault anyone for calling the film a monumental waste of time.

But if you’re looking for dumb, mindless entertainment and a plot that seems ripped from the 90’s (again, looking at you, Hard Rain), you could do worse than The Hurricane Heist.