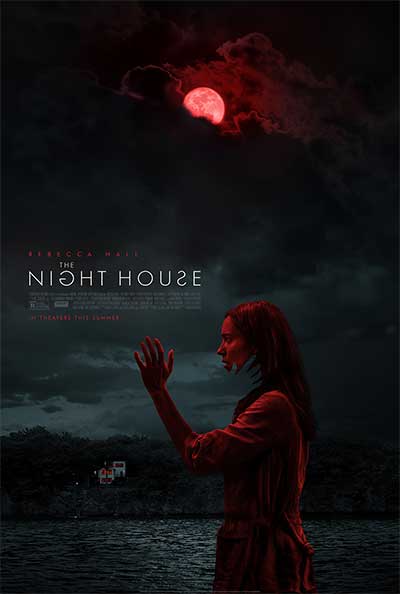 Sometimes it’s just best to go stay at a friend’s house for a few days. Your husband fatally shooting himself is a good excuse. Hearing bumps in the night is another. Seeing mysterious figures in the middle of the night is a sure tell sign that you should get the hell out of there.

Of course, The Night House, like so many other horror movies like it, wouldn’t be very fulfilling if the protagonist just up and bounced.

And, like so many other horror movies like it, The Night House relies less on originality than it does the craftsmanship of the director and the ability of its star to elevate the material.

In that shadowy vein, The Night House is an expertly made and atmospheric thriller. Director David Bruckner carefully builds suspense, beginning with the stereotypical knocking-at-the-door-but-no-one’s-there bullshit but quickly accelerating to more compelling scares. The Night House is at times scary, the combination of Bruckner’s restraint with the film’s sound mix an effective one-two punch that causes you to lean in before you get slammed back. The scares give way to plotting in the second half, as the dead husband’s dark secrets come to life, either real or imagined.

But the movie largely excels thanks to Rebecca Hall, a terrific actress who leans in hard here to navigate the treacherous challenges of her character. She’s a woman in shock, traumatized beyond belief, who may or may not be going crazy. It’s a tough act to pull off, but Hall makes it look easy.

And yet, like so many other horror movies like it, it’s hard if not impossible to describe how The Night House stands apart from the many other women-in-a-house-alone kind of movies in the genre. It’s well made, it’s well acted, but that’s not enough these days to move it into the upper echelon of horror flicks.

Worth seeing but perhaps less so remembering, The Night House is a satisfying picture. Thankfully, no one decided to go stay at a friend’s house for a few days.

'The Matrix Resurrections' Trailer is Here

Roland Emmerich is Back with the 'Moonfall' Trailer