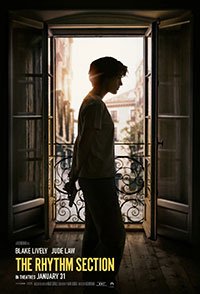 As the Joker would say, “Why so serious?” The Rhythm Section is what you get if you took Atomic Blonde and stripped away the color, energy, and the main character’s ability to actually be effective at her job. Even still, it’s almost a really good movie. The “almost” part is what makes the experience so frustrating.

The movie starts off with Blake Lively not looking at all like Blake Lively, and by that I mean butt-ass ugly. A few years removed from the death of her family following a jetliner crash, she is now a drug addict and prostitute, because apparently that’s what would happen to Blake Lively if anything were to ever happen to Ryan Reynolds.

She is suddenly drawn out of her wretched “retirement” when a journalist approaches her, logic aside, to tell her that not only was the airplane destroyed due to a terrorist act (apparently, the authorities didn’t automatically suspect this) but that the bomber is walking the streets of London, doing what bombers do when not creating bombs. They walk the streets of London. Probably whistling a tune.

Bad things happen, and she is recruited by a former MI-6 agent (played by Jude Law) to become an assassin and hunt down the people responsible for her family’s murder. One would think there are better people to accomplish said mission, but OK. She is smart… but she also sort of sucks at fighting and is pretty damn hesitant to kill someone, a key résumé requirement you would think for an undercover assassin.

Directed by Reed Morano and written by first-timer Mark Burnell, who looks sort of like Christopher Nolan if you squint, The Rhythm Section actually has a lot going for it. Blake Lively is aces and her character arc is pretty fascinating. The movie is gritty and grimy and grounded, aside from some major logic gaps, and presents itself as organic and largely believable. The movie looks great, with Morano setting a consistent tone.

The problem, of course, is that the tone is consistently bleak. While serious, the movie seems to go out of its way to be as dreary and depressing as possible, with the only relief in sight for audiences the credits at the end of the film. It’s in this final moment that the movie’s soundtrack (which I generally liked) blares a remix of “Where Did You Sleep Last Night” and The Rhythm Section maybe hints at what it wanted to become, an off kilter assassin movie with a scrappy, badass woman. But until then, a little more--just a little more--lightheartedness would have gone a long way.

As good as Lively is, her character is frustratingly awful at her job. It’s never entirely clear why Law’s character decides to train her in the first place, let alone put her in the field when she is clearly not ready. More frustrating is that Morano and Burnell never let her transform into what literally everyone in the audience wants her to be: an at least somewhat decent killer. By the end of the movie, she still is quite bad at what she does, an odd storytelling move by the filmmakers to say the least.

Building on that, the climax is also disappointing. After mucking up the job once again, Lively spends several minutes running through the streets of Marseilles or wherever she is--but for the life of me I couldn’t tell whether she had already killed the guy she was after and was fleeing the scene, or was chasing after him. This confusion sucked any sense of suspense from the finish (hint: she’s chasing after him), and even when she’s able to confront him again it wasn’t clear how they ended up in the exact same place. The post-climax finale also leaves much to be desired.

The Rhythm Section has a lot going for it, but the third act is a slog that often goes the wrong direction. It’s a real shame, because the movie was only a few alterations away from being relatively fantastic; as is, though, it’s a forgettable dud.

'Raya and the Last Dragon' Gets a Review