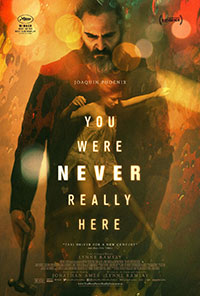 Written and directed by Lynne Ramsey, whose last film was the excellent but extremely dark 2011 drama We Need to Talk About Kevin, You Were Never Really Here is a superbly made, well-acted and visceral production that never entirely finds its rhythm. It’s the kind of violent thriller that critics love because it lacks some of the stuff that everyone else loves and emphasizes the psychology of the protagonist, whether or not that actually makes the viewing experience better.

Joaquim Phoenix is terrific in the role and is frankly the perfect choice for a bearded man who kills people with a hammer but suffers from flashbacks and hallucinations of a past that is barely explored. But he’s also in full mumble mode, and even with the volume turned up high it’s hard to understand half of the things he says.

But that’s good, I guess?

The plot, as simple as it is, was also hard to understand as well. That’s probably on account of my multitasking—I figured I could do things on the computer while watching a movie about a man who goes around killing people with a hammer—but Ramsey obfuscates the basic plot elements to where you really have to pay attention closely to figure out what is going on, probably because art seems more artistic when plot details are suppressed. Again, I was multitasking, so fans of the movie may read this and say, “She spells out the fucking plot, you fucking idiot.”

[note: I’ll likely get comments like that anyway, even from people who haven’t seen the movie.]

Still, You Were Never Really Here has a lot going for it, including some violent bursts of action that dot the story and a couple of twists and turns that make it hard to predict where it’s going. It’s well written, has solid acting, and looks great. It just isn’t the badass vigilante thriller you may expect. Or want.