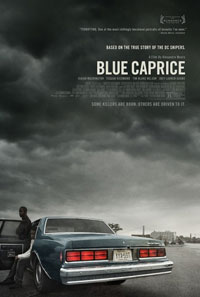 I was in college when the beltway sniper shootings occurred. I remember being captivated by the case, literally watching hours of television waiting for new developments. I don't know why I was so captivated - maybe because it was the uniqueness of the serial killings, the sheer randomness of it all, the seeming lack of evidence. Or maybe it was because there was nothing else on television. Regardless, there is now a movie about these tragic events.

The movie attempts to dissect the motive of the two killers, but unfortunately fails in this regard.

Director Alexandre Moors and writer Ronnie Porto make their feature-length debuts with Blue Caprice and put their best foot forward. The movie looks good, maintains a good pace and is generally a well written piece. But when all is said and done, I'm not sure what the goal of the movie was - or what people who knew nothing of the case going into the movie would take away from it.

According to the movie, John Muhammad is an angry individual who is frustrated that his wife has taken his children away from him (one alleged motive for the killings was that he wanted to cover-up the murder of his wife by distracting the police with what would look like the work of a serial killer). Lee Boyd Malvo is lacking a father figure and falls victim to Muhammad's influence.

But Blue Caprice is a character drama, not a procedural, and the result is a loose psychological thriller that increasingly lacks focus as the story progressed. By the time the beltway shootings commence, the killers' motives still aren't clear, and to put icing on the cake, the filmmakers gloss over the actual killings. The final act could have been tense and disturbing, but instead the filmmakers shy away from being conventional. When the credits began to roll, my first reaction was, "That's it?"

Blue Caprice had potential, but I was hoping for something a little more straightforward. An exploration into the two killers' psychological motivations could have worked, too, but the filmmakers fail to answer the most important question: Why? As a result, Blue Caprice largely lacks a reason for existing.

'Fatale' is More Fatal than Attractive

A Review of the Surprisingly Good 'Monster Hunter'